The second half of december was a quiet time.

We had finished the house and even finished building a couch to sit on (very, very proud of it! See picture;), so that we could watch movies on a big screen (the white plastered wall in the living room) comfortably again, instead of on our computer in bed.

We could, for instance, watch 'Bright' with the two families on Christmas eve and let all the kids watch a nice movie on new years day.

Quiet times are not in any way easier then busy times. It is hard not to start 'waiting' for something to happen... Like Senecyt recognizing Eric's study (which they did, just before the end of the year!), or the inspiration to start with something. Anything.

Things seemed to be slowing down. Nothing went automatic anymore, it seemed. Were we doing something wrong?

For instance: we had talks about maybe starting a coffeeshop together with Nikki and JF, where we could also sell our homemade cheese, coffee and wine (hmmm, maybe start by getting some cows?). But finding a spot where a coffeeshop would work well did not 'flow'. Any suitable spot is ridiculously expensive we found.

At some point we need to get some form of income, but apparently this was not the way.

Another example: the little piece of land we had bought might not be ours?! JF bumped in to the owner one day and he said the buying process was not finished. A lawyer needed to be involved to finish it. Very vague; he had waited for us to do this, but we had no idea it had to be done.

These little things, in combination with not having much to do, was difficult. And watching movies or doing shopping can only make you feel better for so long.

The days seemed empty, our lives seemed useless, no meaning to anything.

My solution to these times in my life has become to look at the uncomfortable-ness and accept it. I used to jump in some useless, uninspired action, but it never brought me anywhere.

So I took to meditating. If necessery I would do so for days (with breaks to eat, sleep, do necessery shopping or watch a movie).

Eric followed suit, because he knows how uninspired actions in our lives usually end. He gets more frustrated then me, which makes it harder for him to surrender to it. But once he does, he usually gets an inspiration or insight quite quick.

One day, between Christmas and New Year, he was inspired again.

(I think we had only been in this empty feeling for one or two days, but it felt like weeks.)

His inspiration was about the piece of land we bought. He proposed to start building on it. So that we could all 5 work on something together, we could practise building a house and we could live in it for a while. That way we would be much closer (a few hundred meters) to the land we eventually wanted to live on.

The funny thing is, I never understood this piece of land. I did understand it had a meaning in our lives, if maybe even only energetically (to really have a place here that was our own, here in this country), but I felt no inspiration to do anything with it. But when Eric came with his idea, I suddenly felt inspired as well (?!). It suddenly felt like the right thing to do.

Nikki and JF supported our idea.

They were busy making an old house live-able nearby. This has some priority for them, because they are currently house sitting for someone who will be back in a few months. So they would help when possible, but it would mainly be the project of our family.

After New Years eve (Mar's birthday) we would start.

Pictures below; looking at the land from higher up, with JF (he cut a path the hill up in the heat, this guy has a fitness and energy...!) 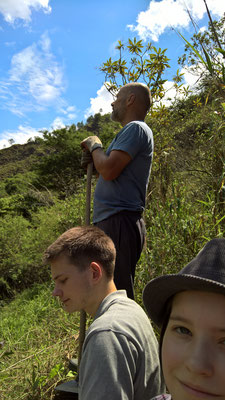 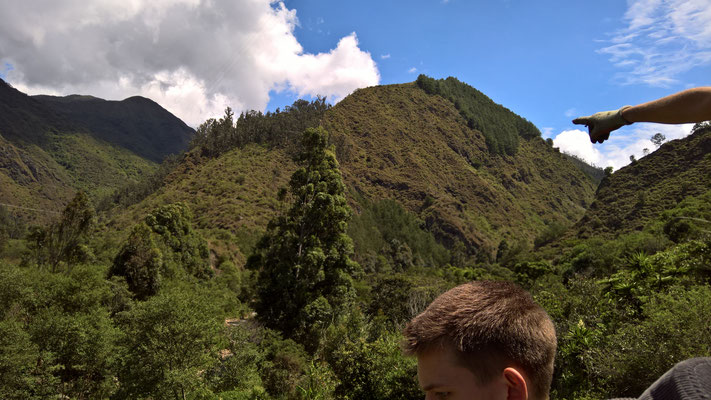 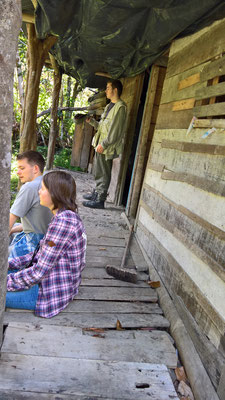 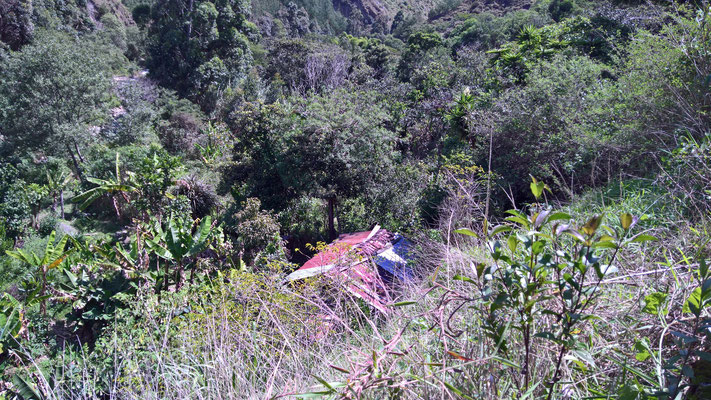 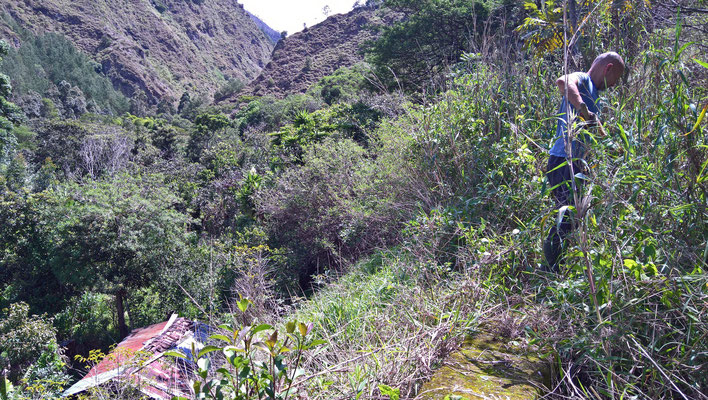 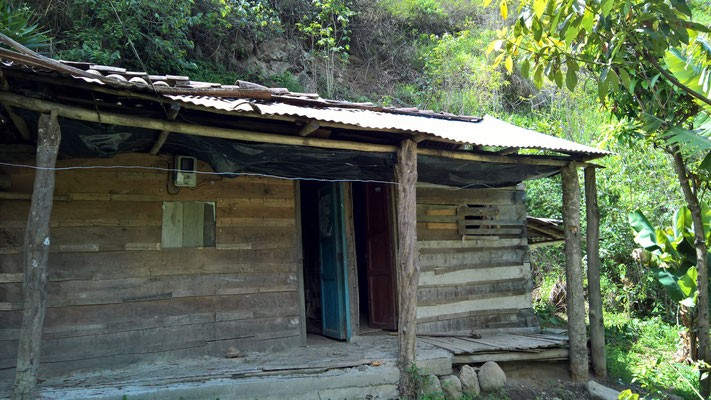 We started with the demolishment of the old house. Interesting amount of insects everywhere by the way...

Beer sat on the roof, throwing the tiles off, while being eaten by ants. He told us the whole roof was rotten and filled with ants eggs.

Lem felt spiders on his shoulders and down his back when he tore at a very old and rotten part of the house.

Eric removed the (still live?) electricity box and replaced it against a tree.

Mar had fear of hights when she had to stand on the ladder for Eric; the ladder was too old and rotten to hold anyone else then her...

I put my energy in clearing a path through the bush and clearing a spot to put all the suitable wood from the house on. I was surprised by the amount of energy I had that day.

We still have some days of work ahead to tear the whole place down.

After this, in a few weeks, an excavator will clear a spot for our house.

In the mean time, we hope to get more clarity on how permits work, here.

One New Years eve, 14 years ago, I gave birth to our last child (and our first girl).

She is in a lot of ways a very strong and wise person. I feel very honored that I can watch her grow and change, up close. Although; if I try to help her with anything, she is quick to point me back to myself. She doesn't want any help from anyone.

So my observing has to be done from some distance. A lesson in trust for me.

Her birthday wishes were very unusual this year:

- chocolate, all for herself.

- dorito's, all for herself.

- a pineapple, all for herself.

- peanuts and pistachios, all for herself.

- learning how to make her own bow and arrow and to shoot with it.

This last thing was, off course, the fun thing to arrange for us (next to a few 'surprise gifts').

We found a German pensioned engineer, alias martial arts master, alias archery master and teacher, alias woodworker. He also is skilled at throwing daggers. He set up his garden to teach and practise all these things. He has a wood shop where he makes his own bows. They are beautiful and very strong. We were quite impressed while looking around.

With the archery he aims to teach 'hunting archery', which is an instinctive form of archery. He believes that we have the skill in our genes and just need to wake it up. Therefore he doesn't teach you to aim at a target, but to trust that your body will get the arrow in the orange dot, if you don't try.

This really is in line with what Mar wanted. She loved her first lesson and could see that it works exactly like he says; if she was 'aiming', her arrow went too high, if she was 'still' inside, it went in the orange circle.